Ok folks, I’m not going to lie. This weekend has been what can best be described as a boozy afair hanging out in what has to be up there now in the top craft beer cities in the country…Newcastle.

When I first saw the Free Trade Inn had advertised it’s 2nd annual London Brewery weekend (more on that later), I hastily booked a day off work for the Friday so I could attend due to a major cock up with my calendaring skills. It turned out that I could have actually just attended on the Saturday and be done with it, but a beer festival like this one deserves some love and attention. Roll on the “research trip” of Friday.

With Friday being effectivly a spare day, I decided to do a few hours “research” before heading over to the Ouseburn. I regulary carry out “research” trips into places if I’ve heard of new bars or restuarants opening or if I’ve passed somewhere and just want to check it out. I met up with Alistair who decided with it being British science week that this “research” should be for well…science. It was a good enough excuse and we were sticking with it.

We started off at the Victoria Comet, formerly O’Neill’s opposite the train station. The drinkers are still as loud as what they used to be, the sort of place that attracts stag and hen dos with it’s location. A quick half and we moved on. Next stop was The Bacchus, located on High Bridge, this Sir John Fitzgerald’s chain member has always pulled me in with it’s friendly staff and decent selection of beers. They have recently held a tap takeover of the Epic variety and still had a lot of taps dedicated to the New Zealand brewery. I decided to try a half of the Armageddon IPA, a very quaffable drop at a tad under 7%. Time to move on again… 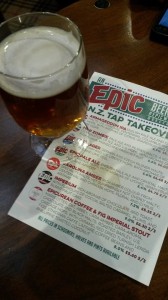 Next stop dAtbAr. Located on the side of the Theatre Royal this modern city centre boozer which opened last March always comes up trumps with it’s atmosphere and drinks selection. When I see the name on the board of “Magic Rock Brewery“, no decision has to be made of what beer I’m going to go for. I love Magic Rock, their beers are fantastic and they undoutably have some of the best pumpclip designs I’ve ever seen. Beer of choice, Canonball, a 7.4% IPA.

With this being a “research” trip, we needed to call into somewhere else where I hadn’t been. Bierrex, formerly Popolos located just round the corner, owned by the same people as dAtbAr, this smoke and tap house again provided a heady selection of drinks. Magic Rock featured on the menu again and this time I went with High Wire. The 5.5% West Coast Pale Ale.

By this point we decided to grab some food, venue of choice The Cluny situated over the Ouseburn and not too far from the Free Trade. High Wire again the drink of choice, paired with the famous Cluny burger.

With the afternoon quickly dissapearing, we moved over to the Free Trade Inn for the highlight of the day and the main reason for this trip. The Free Trade Inn 2nd annual London Brewery Weekend… 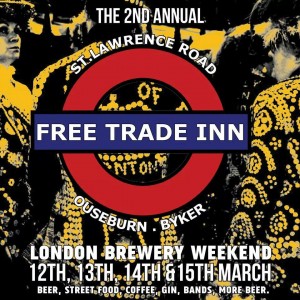 Michael Potts, the manager of the Free Trade Inn, pulled off a belter of a festival last year (Some serious hangover encountered on the Sunday) and he decided to do it again this year. Bringing some of the capitals biggest (and a few not so big) names in beer and gin to the North East. A four day festival of all things London.

First things first, you know it’s going to be a good festival when the tag line on the bottom of the poster is Beer, Street Food, Coffee, Gin, Bands and more beer. I met Billy and Stephanie, grabbed a beer map and made a start. 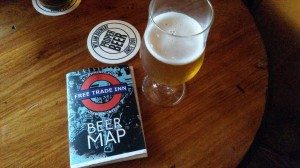 I started with the Red Church Bethnal Pale at 5.5%, a very easy to drink beer and my baseline drink for the weekend if I needed to fall back to something whilst deciding what I wanted next. As the night went on and being joined by PJ and Brian, we made out way through the beers. Red Church’s Bethnal Pale, Weird Beard’s Faceless Spreadsheet, Fuller’s Frontier lager and Kernel’s Citra all hitting my taste buds.

Earlier in the evening it was suggested that I try Alpha State’s Larsons Ruin Imperial Stout. This nearly proved to be Martins Ruin, but by god what a drink. The 10% coffee monster was an excellent choice for the last beer before heading home.

I returned again on Saturday for round 2, meeting up with PJ, Andrew, Emma, Gary and Jill. We all supped our fair share. My beers of choice throughout the evening were Red Church’s Bethnal Pale, Beavertown’s Londonerwiesse, Anspatch and Hobday’s IPA, Beavertown’s Bob Barley and again Apha State’s Larson Ruin Imperial Stout.

I have to say Michael and the Free Trade Inn staff pulled off another one hell of a London Beer festival and if they hold it again next year which I so hope they do, then please do yourself a favour and get yourselves up there to enjoy some of the best beer that the UK has to offer….and thank me later.

As I was about to leave in my drunken state, I had a chat with Andrew. A few ideas got thrown around as they ineviatably do at these type of things and it was suggested that we need to do a Tour De Durham just after Easter.